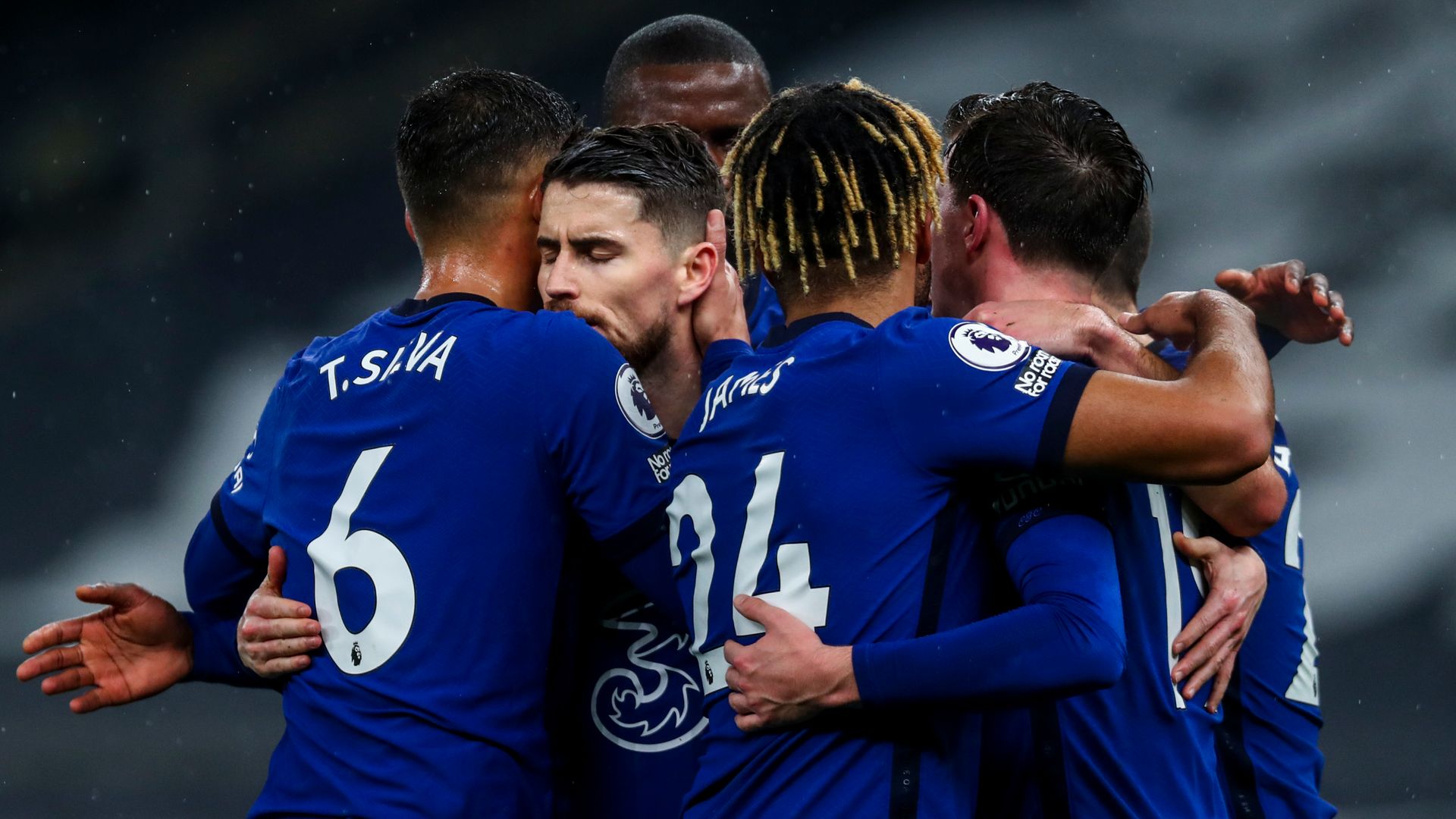 Jorginho’s first-half penalty saw Chelsea deservedly beat Tottenham 1-0 as Thomas Tuchel won his first game on the road in charge of the Blues.The Italy playmaker converted from the spot after 24 minutes following a foul by Eric Dier, who needlessly brought down Timo Werner in the decisive moment of the match.

Jose Mourinho’s side barely threatened thereafter in what was a lacklustre display from the hosts, who have now lost their last three games in a row, including their previous two at the Tottenham Hotspur Stadium for the first time at their new ground.As a result, Chelsea have jumped up to sixth in the Premier League, while Spurs stay eighth in the table.

How Tuchel made it back-to-back winsMuch of the pre-match talk focussed on Werner as the misfiring Chelsea striker looked to get back among the goals again – the Blues’ big-money summer signing entered the match having scored just once in his last 18 contests in all competitions – and the German very nearly did so straight from the kick-off with a header that looped inches over the bar.
That, however, was a foretaste of things to come in the first half as the visitors took an early stranglehold on proceedings, pushing their London rivals back and dominating possession as Spurs struggled to get out of their own half.

Carlos Vinicius, on his first Premier League start for the north Londoners, was forced to plough a lone furrow in attack and it came as little surprise when Chelsea deservedly opened the scoring midway through the first period.
Cesar Azpilicueta picked out Werner’s run in the area and despite there seeming to be no real danger, Dier could not resist dangling a leg out and in so doing, the England centre-back caught his man to leave referee Andre Marriner no choice but to point to the spot.

Team news
Spurs handed Carlos Vinicius his first Premier League start for the London derby against Chelsea.
Vinicius has only previously appeared as a substitute since his October loan from Benfica, but stepped up in the absence of Harry Kane, with Spurs reverting to a back four.
Meanwhile, Chelsea started with Marcos Alonso and Timo Werner in a 3-4-3 formation as N’Golo Kante missed out in Thomas Tuchel’s first away game in charge.

After a mixed recent penalty record, though, Jorginho abandoned his normal hop-skip-and-a-jump routine and instead powered the ball into the bottom left-hand corner of the net for his fourth league goal of the campaign, all spot-kicks.Despite losing experienced centre-back Thiago Silva with a muscle problem nine minutes before half-time, Chelsea continued to dominate in the driving rain, going close on several occasions in the second half to doubling their lead.

However, a combination of good defending from Serge Aurier – the right-back made a key interception to deny a certain Werner goal – poor finishing and Hugo Lloris’s reflexes meant the result remained in the balance right until the very end.And on another night, substitutes Erik Lamela and Lucas Moura may have snatched an unwarranted point for the hosts, before Vinicius headed inches wide of the far post late on as Chelsea looked to protect their slender advantage.

Tuchel matches Mourinho feat – Opta statsTottenham have suffered three successive Premier League defeats for the first time since November 2012 under André Villas-Boas.Chelsea have won seven points in their three Premier League games under Thomas Tuchel (W2 D1), as many as they managed in their final eight top-flight games under Frank Lampard (W2 D1 L5).Tottenham have lost four of their last five Premier League games when Harry Kane hasn’t played (D1), with two of these four defeats coming against Chelsea (1-2 in February 2020 and 0-1 tonight).Tottenham manager José Mourinho hasn’t won any of his last seven meetings with Chelsea in all competitions (D3 L4) – his joint-longest winless run against an opponent in his managerial career, after another run of seven games against Barcelona (between April 2011-January 2012).Jorginho’s opener for Chelsea was his 10th Premier League goal, eight of which have come from via penalties – the highest share from the spot of any player to net at least 10 times in the competition (80%).Alongside Jamie Vardy, Anthony Martial and Patrick Bamford, Chelsea striker Timo Werner has won the joint-most number of Premier League penalties so far this season (3 each).

What the managers said…

Jose Mourinho says Tottenham ‘deserved more’ for their second-half efforts against Chelsea and told referee Andre Marriner he did not like his performance.

Jose Mourinho: “The performance in the first half was inferior to Chelsea. They had the initiative and they had the ball. We were in very low positions. The reality of the first half is that with them being superior, a penalty decided the game. In the second half, they were not superior, and they had the low block.”On referee Andre Marriner’s performance: “I told him something he knows already. I consider him one of the best referees in the Premier League. I care for him and he is a referee I have big admiration for. That gives me a good position to tell him I did not like his performance.”On Bale’s situation: “I’m doing my best. He’s doing his best. Everybody is doing their best.”

Image:
Thomas Tuchel and Jose Mourinho before the game between Tottenham and Chelsea

Thomas Tuchel: “In general I’m very pleased with the result and the deserved win. We were very, very good in the first half and very dominant, very strong with the ball and good with counter-pressing, we did not allow counter-attacks against one of the most dangerous teams in Europe for counter-attacks.”So that was very strong, although we lacked a little bit of precision in the box to make it 2-0, composure to score more goals and decide the match. So second half was harder as we had some easy ball losses, we lost a little bit of ball possession and confidence, but we never lost intensity and the structure to defend.”We never lost the intensity to push up high and the courage to defend up high and up front and with that I’m very, very pleased. It is normal that if you play a dominant game like this and do not score the second one, it can happen that some minutes arrive that you have to suffer.”But we were absolutely ready for that mentally and physically and I’m super happy with the effort, we defended excellent, we again had half chances, big chances with counter-attacks, but we could not finish them.”So we conceded only one chance and that was when Tottenham risked a lot, so I’m happy.”

Thomas Tuchel was delighted with his side’s display at Spurs

‘Spurs are miles off Champions League football’Ex-Spurs midfielder Jamie O’Hara speaking on Sky Sports News:”Spurs would have got booed off the park for that performance. Once at half-time and again at full-time.”They had a 10-minute spell in the second half where they looked to maybe press, but it was too desperate. When they had the ball there was no plan, no one getting into pockets of space to try and make things happen. It was all lacklustre, trying to get the ball up to Carlos Vinicius, and he wasn’t holding it up.”It was a really disappointing performance. It looks like they work so hard defensively to keep clean sheets that when they get the ball, they don’t know what they are doing with it when they are going forward. There’s no plan and nothing to their play. There’s no movement or rotation.”It was really poor and the saving grace for the players out there was that they would have got booed off the pitch had there been fans in the ground.”Tactically, Spurs were completely outclassed and that’s happened a few times. Brighton and Graham Potter did it at the weekend with a lesser team. You can’t say Chelsea are a better side with a better squad. It’s not been good enough and he needs to address it quickly. He (Jose Mourinho) needs to organise this team, organise the way they are playing, stick with it and get something out of them.”At the moment, Spurs are miles of Champions League football.”

Man of the Match – Mason MountThere was much chatter when Tuchel omitted Mount from his very first Chelsea line-up at home to Wolves last month, however, the midfielder has since started the next two games, no doubt catching the new manager’s eye in both clashes.Mount was outstanding in Chelsea’s 2-0 win over Burnley at Stamford Bridge on Sunday, before delivering a man-of-the-match performance in north London four days later and now he will be hard to drop.Playing in a forward line with Callum Hudson-Odoi , in support of Werner, the England international was his side’s attacking conductor, with all that was good coming through him.The only thing missing from the 22-year-old’s display was a much-deserved goal that would have come but for a terrific low stop from Lloris to deny him 14 minutes from time.​​​​​​What’s next?